The Presbyterian Church on Edisto Island

One is struck by the many churches lining the two lane road onto Edisto Island. Many are African American, understandably, since the island, since the first federal census, was populated mostly by blacks, as it is today.

But a beauty of an historic church is the Presbyterian Church on Edisto Island, built by white planters in 1830. In the handsomely photographed book, Plantations of the Low Country, researcher Agnes L. Baldwin writes that the earliest settlers on Edisto Island were Welsh and Scottish immigrants, and that Rev. Archibald Stobo “had begun preaching on Edisto in 1722 and that (the church) had been established by at least 1710.” She continues, interestingly, “at first the Presbyterian worshippers shared their building with the Baptists, and relied on circuit riders for their pastors, but by 1722, they alone were using the church.” 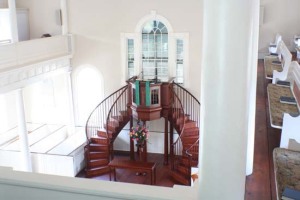 A large balcony with exterior entrances was built for  slaves. The church interior has been beautifully restored, today, to include its original high pulpit .

Historically, Anglican and Presbyterian churches made earnest efforts, Baldwin writes, but could not compete with Baptists and Methodists in attracting Black churchgoers. The Allen AME Church, The Old First Baptist Church and many other smaller churches on Edisto, today, are historic and teaming with churchgoers every Sunday. Many drive long distances to attend.

But there is a Presbyterian Church that is black, now, down the road. The Rev. McKinley Washington, pastor of Edisto Presbyterian Church, is in his 70’s. He served for 27 years as a legislator, first in the House, then the Senate. In 1964, he organized a branch of the NAACP and led a successful voter registration drive. Today, the beautiful bridge that leads to Edisto Island is named for him, and he gathers, still, a loyal congregation.

Interviewed in 2007, Washington said that his church started shortly after the Civil War in the same way many black churches began. “Blacks worshiping in the balcony of the white church, The Presbyterian Church on Edisto Island, just up S.C. Highway 174, were asked to leave — during a service, the story goes. They finished their worship that day in the shade of an old oak tree.”

Their first church structure was assembled with material from Palmetto trees. Eventually, a tiny church building was uprooted from Edingsville Beach, floated up the river to Murray’s Landing, then set in place at Cypress Bottom Road and Highway 174, Washington said. In 1968, the current brick structure with its huge Presbyterian cross was erected. It’s name is Edisto Island Presbyterian Church. 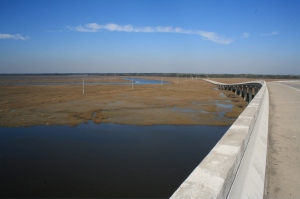 The interview continued, “Today, the white and black churches rarely comingle, though the Rev. C.F. “Chuck” Klotzberger, former pastor of the Presbyterian Church on Edisto, did issue a public apology to Washington’s congregation a few years ago. Klotzberger acknowledged the troubling history of the island and disunity between the races. Washington said it was a courageous and admirable gesture.

“There is still a way to go in the church, still a feeling of inequality and racism,” Washington said then. “There’s too much segregation on Sunday morning, and we still have to fight to advance the gospel of Jesus Christ.”

I will go back to the music and hope of Jack McCray’s comment to me last Friday evening, as we, a white woman and black man, stood in front of a tiny slave cabin at Magnolia Plantation, breaking bread together.

He said to me, “Edisto Island is God’s Country.” I believe with all my heart it is.

8 comments on “The Presbyterian Church on Edisto Island”