Wynken, Blynken and Nod one night, sailed off in a wooden shoe…..sailed on a river of crystal light…
into a sea of dew…

As a child, one of my favorite books was a beautifully illustrated poem called Wynken Blynken and Nod. It was an odd shaped, tall book, about a child’s night of sailing into dreamland armed “with nets of silver and gold.” It is a warm and imaginative journey of memory, and I am sure the imagery and the beauty of the drawings helped shape my child artist self. My early childhood was also rich with sand and sea and forest and pond, and the power and resonance of the ocean continues to sustain and enrich my world. Like the words of Isak Dinesen:

“The cure for anything is salt water – sweat, tears, or the sea.” 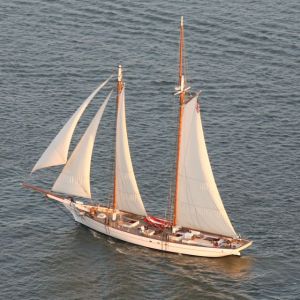 The Spirit of South Carolina

So of course my imagination is captured by Charleston’s beautiful tall ship, the Spirit of South Carolina. Built in 2007, she sails out of Charleston waters now and, “possesses a proud, unique heritage. This ship descends from a line of swift, able schooners that served the coastal and harbor pilots along the southeast coast from the mid 1700’s to the early 1900’s. The Spirit of South Carolina is a pilot Schooner reminiscent of the Frances Elizabeth, a vessel that was originally built by the Samuel J. Pregnall & Bros. Shipyard in Charleston in 1879. Plans for the Frances Elizabeth, from which the new ship was adapted, were found in the Smithsonian Institute.

“In weather both fair and foul, the intrepid mariners who sailed these vessels”…were some of my own early ancestors who navigated these waters and whose memory I am tasked to recall. Dr. Henry Woodward, first English settler in South Carolina and early explorer (and ship’s doctor to the pirates!) hitched a ride with the Carolina and those first settlers to Charleston. Captain John Colcock from Essex, England arrived in Charleston in 1730, but gave up his life at sea when he, soon after arriving, married Deborah Milner and became the Justice of the Peace. Ephraim Mikell lived on Edisto Island and on St Helena, and in May of 1742, according to the fine historian Larry Rowland (History of Beaufort Country, Vol 1) lost “a fine new schooner built in Beaufort, and loaded with one hundred barrels of rice, to a Spanish Privateer.” And the very interesting Scotsman, John Gordon who came first to Frederica, Georgia, and who lived in Charleston and Beaufort, marrying Elizabeth Wright, then Catherine Smith, daughter of the Judge from New York. His story continues to reveal itself and intrigue his descendants, and I am now blessed with new cousins in America, England and Australia, which is one very wonderful result of loving South Carolina’s early history!

South Carolina’s Maritime history was previously uncharted it seems, but is certainly is a large part of our collective cultural Lowcountry history. There is now a South Carolina Maritime Foundation, a non profit whose mission is to offer effective, unique educational opportunities for students. They commissioned the building of this fine ship.

I can hear the spirits of the ancestors cheering on this endeavor. May more stories be told! May more pictures be found and may more of this grand history be remembered. May this voyage be blessed.