Helen’s legacy, The Power of Love 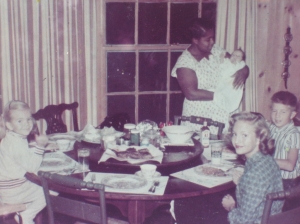 “Real power is usually unspectacular, a simple setting aside of fear that allows the free flow of love. But it changes everything.”

As a child growing up in the fifties and sixties in segregated North Carolina, I saw my own reality with fresh eyes of innocence. My father was a white doctor in a small rural town. His office had a ‘colored’ waiting room, and I hung out at the office nearly everyday as a little girl. At home my parents employed a woman named Helen Graham, to care for me, and my three siblings, and to help my mother at home.

The primary feminine voice of my childhood was this black woman however, whose wise laugh I remember in my bones, and whose serenity and warmth helped me survive the wintry years later. It has taken me until now to understand my strong attachment to the African American culture, and why I still feel such a calling to build bridges between us.

As a child, I felt the differences. But I knew the love.

A recent piece by Martha Beck in “O” mentioned South Africa’s culture, and it helped me understand my own feelings.

“Those who mistake violence for power are often surprised by this: Apartheid’s architects in South Africa didn’t think twice about all the black women who were paid meager wages to “mind” white babies. They didn’t realize that these women would do something revolutionary, choosing to see the infants of their oppressors not through the eyes of fear, as future enemies, but through the eyes of love, simply as babies.”

“For many white South Africans who were raised by black ‘mothers,’ there was no way on earth that apartheid could seem right to us. These women became heroes by insisting that love prevail…choosing love over fear in any situation whatsoever.”

Love over fear. It still feels like the essence of things. Thank you, Helen.

3 comments on “Helen’s legacy, The Power of Love”