New Birth in a New Year 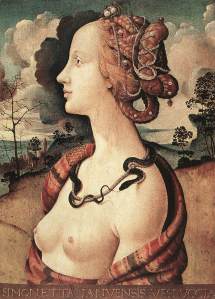 “A strong lock hides something extremely precious…the thicker the veil, the more valuable the jewel, for a hoard of treasure is guarded by a large snake. Do not dwell on the hideousness of the snake, contemplate instead the dazzling and the priceless things you’ll discover in the treasure.” – Rumi – (my edit)

This painting is by Italian master, Piero di Cosimo, who lived all his life in Florence. it appeared one day on my Google page. I was riveted. What did the snake necklace wrapped around the beautiful neck of Simonetta represent? I was living in Rosy on Edisto Island, and the parallel to Paradise is real, down to an abundance of snakes, who love the verdant jungle as much as we humans revel in its rarity. 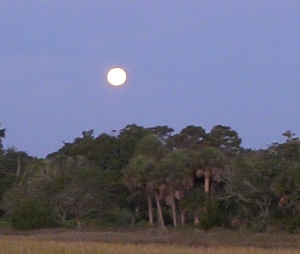 Worldwide, in most mythologies the snake is holy. Looked at as poetry, the serpent, because it sheds its skin, represents immortal energy and consciousness, constantly throwing off death and being born again. Like the Carolina moon sheds her light, and waxes and wanes to be born again, so the snake sheds its skin.

In the mythology of late Classical antiquity, the snake, especially when shown biting its own tail, was a symbol for eternity, or for time’s rejuvenating cycle. It was therefore attributed to Janus, the god of the new year, and to Saturn (Kronos, whose name was often confused with time, Chronos), or “Father Time”.

In the inscription of this painting, Simonetta is described as “Ianuensis” (belonging to Janus). She was considered to be the most beautiful woman in Florence, even of all the Renaissance. Through the Vespucci family Simonetta was discovered by Sandro Botticelli and other prominent painters upon arriving in Florence. Before long every nobleman in the city was besotted with her.

It just seems right to begin the new year with the lovely Simonetta, and to honor the many (often feared) serpents living in the jungles of this seductive Carolina Lowcountry. May we all learn to shed our skins this year, and create ourselves anew.

3 comments on “New Birth in a New Year”