Home › art › Dancin’ the Charleston in a Jazz-y town

Dancin’ the Charleston in a Jazz-y town

Posted on October 25, 2010 by Charlotte Hutson Wrenn — Leave a comment

“Dance, when you’re broken open. Dance, if you’ve torn the bandage off. Dance in the middle of the fighting. Dance in your blood. Dance when you’re perfectly free.” — Rumi 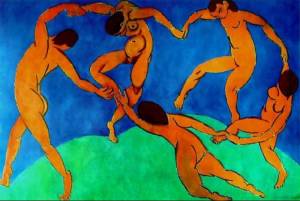 The Dance by Henri Matisse

The Charleston is the dance we proudly acclaim as our own Southern creation. And you must to go back and watch that video hooked to that pink link! I just spent the weekend at a reunion of former childhood classmates, so all I am thinking of is the value of dancing right now.

The Charleston originated in the African American community ‘on an island off the coast’ of Charleston, SC, in 1903, according to a quick online search. The story is that after its first appearance then, Southern blacks migrated up north to New York, taking the Charleston with them. In 1913, performers danced it for the first time in Harlem theaters, but it did not receive widespread attention until it was adopted by the flappers, women who shortened their skirts and bobbed their hair. 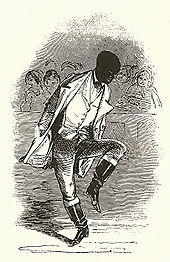 William Henry Lane (1825-1852), while not from Charleston, is the best known African American dancer of the pre- and post-Civil War era. “Master Juba” an honorific name, considered a derivation of giouba, a West African or Yoruba dance, is credited as one of the most influential figures in the creation of American tap dance, according to BlackPast.org. Lane developed a unique style of using his body as a musical instrument, blending African-derived syncopated rhythms with movements of the Irish jig and reel. Lane’s melding of these vernacular dance forms is recognizable today as the foundations of the ever-evolving style of American tap dance.

Free-born in Providence, Rhode Island around 1825, Lane began learning the Irish jig and reel from “Uncle” Jim Lowe, a dance hall and saloon performer in New York City. By the age of ten, Lane was performing in Paradise Square in the Five Points District of New York, where a high concentration of African American and Irish populations lived alongside each other. The vernacular dance forms of these two ethnic groups intermingled, providing Lane access to the different rhythmic and movement foundations that facilitated the development of his style of dance.

Lane’s original use of different areas of his feet to create rhythms, keep time, and improvise complex, syncopated rhythms was revolutionary for the 1840s. He used his heels to create the deeper tones of the bass drum, and the balls of his feet to layer softer, higher sounds. Keeping with African oral traditions, Lane incorporated singing and laughter into his performances, adding another layer to his rhythmic creations. Through these innovative combinations of rhythm, footwork, improvisation, and vocals, Lane created a blended style of African dance and British Isle folk dance still recognizable in modern times. Around 1840 Lane was hired by P.T. Barnum to perform at Barnum’s Museum and was billed as “Master Juba, the Dancing Wonder of the Age.” By 1846 Lane was touring New England and Europe. Author, Charles Dickens is believed to have observed Lane first hand when he wrote about spending an evening at a New York City dance hall, watching “the greatest dancer known.”

The history of Charleston’s music, Jazz, is written by our own historian Jack McCray. The city is reviving a Jazz scene thanks to his work, and the Charleston Jazz Initiative.

“I would believe only in a God that knows how to dance.” – Nietzsche writes. Without a doubt, I say. The God of all creation will meet us on the dance floor!