The Mattress Tree of Edisto Island

“The song and the land are one.” – Bruce Chatwin 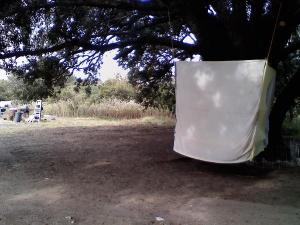 Frank Gadsden died this winter. The full mattress and box springs, the swinging hammock, the one that hung from the limbs of a grand live oak tree on the side of the road for at least a generation, is gone.

The loss of Mattress Point, as some old islanders refer to the place, is no small thing. It was part of the myth of this island paradise. Lying in a hammock is a traditional summertime habit for those who come to the beach for vacation. For visitors to the island, it reminds us of the importance of taking a nap, of putting our feet up, of swinging the day away, “Edislow” style.

The idea to string up, in the huge tree in his own front yard, not just a rope Pawley’s-Island-style hammock, but a whole bed, was funny, funky, and clever. It was an example of what poet and sage Nick Lindsay might call “gumption”. It also spoke to us of hospitality in its own way. It said “Come into my living room, my friend. Sit awhile. Hey, even lie here under this great oak tree. Take a nap.” It was a a symbol, then, not only of welcome and hospitality, but of a certain wildness, of taking a creative leap. Is there something in ourselves, when we arrive at this island Paradise that teases us to take some creative leap?

Certainly the swinging bed was not without its controversy. When so many people stopped to photograph and draw the unusual swing, Mr. Gadsden, feeling exploited somehow by the fascination that artists and photographers and just about everyone seemed to feel about this Edisto Island ‘sculpture’, began to charge viewers 5 dollars, then 10 dollars for a photograph of the thing. Others complained that the place was an eyesore, for Frank also worked on his lawn mowers and left extra mattresses lying around under the great tree. Oh, and the people! Frank’s friends and family gathered there in summer, to wave to passing cars, to pass the time with each other. In winter, men folk met to play cards around a small table, all day long, warmed by the fire burning in an old oil drum. But it was a place with people and energy, whether you liked it or not.

This spirit is one of the reasons many of us have fallen madly in love with the place. Certainly, Edisto Island is one of the most naturally beautifully places on earth. Thanks to The Edisto Island Open Land Trust and her supporters, the big developers have been held at bay so far, and over half of the island is permanently protected by conservation easements. We realize that Henry David Thoreau was right when he said that “In wildness is the preservation of the world.” But what else is it that makes so many of us love this place?

Jane Jacobs, (The Death and Life of Great American Cities) writer and urbanist, wrote that in cities, the worst possible virus, capable of sucking the life out of a place, was “the great grey blight of dullness”. She was referring to cookie- cutter suburbs, too much planning, and sprawl, those strips of roadway that are all too common in American now, with nothing but signs and stores and concrete. Neighborhoods, she argued, need to be… well, ‘interesting’. “There are emotions that draw us to places”, she continued, “and they depend on things being a bit messy….”

Edisto is a wildly interesting place, the natural organic world and the creative spirit of her people in evidence everywhere. There are front porches where people still sit on mismatched chairs; there are whole outdoor living rooms where people entertain themselves by watching other people.

The song language of the Gullah people is still in the air, too, if you listen. This place sings with a great lyrical rhythm. Highway 174 is now a National Scenic Byway. So, when you are headed to the beach this summer, past the curve in the road where the old mattress hung, remember Frank ‘Tisha’ Gadsden, Sr. who was born on on the 2nd of February in 1944, and died last November, on a Thursday, the 12th. Thank you, Mr. Gadsden for reminding us of so much of what we already knew.

23 comments on “The Mattress Tree of Edisto Island”