Home › art › A Painter and a Poet speak of Serpents

A Painter and a Poet speak of Serpents

Poets and Painters inspire each other. Mary Oliver’s poetry is my intimate companion. This is a painting about Edisto Island, South Carolina, our small undeveloped barrier island, the last sea island in South Carolina and one that has escaped the developers, so far. Snakes are a large part of Edisto, as it is thick with the jungle brush of native canopy. Charmingly we have a real Serpentarium on the island, built by two brothers, Ted and Heyward Clamp, who capture the healing venom, educate the public about snakes, and provide natural habitat for the reptiles.

And from Wikipedia: “used in a specifically mythic or religious context, snake that is to be regarded not as a mundane natural phenomenon nor as an object of scientific zoology but as the bearer of some potent symbolic value.”

A snake sheds its skin and has a second life. I like that. Here is the marvelous poem from Mary Oliver: 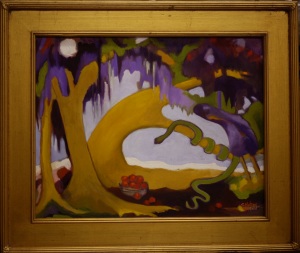 When the black snake
flashed onto the morning road,
and the truck could not swerve—
death, that is how it happens.

Now he lies hooped and useless
as an old bicycle tire.
I stop the car
and carry him into the bushes.

He is as cool and gleaming
as a braided whip, he is as beautiful and quiet
as a dead brother.
I leave him under the leaves

and drive on, thinking
about death, its suddenness.
its terrible weight,
its certain coming. Yet under

reason burns a brighter fire
which the bones
have always preferred.
It is the story of endless good fortune.
It says to oblivion: not me!

It is the light at the center of every cell.
It is what sent the snake coiling and flowing forward
happily all spring through the green leaves before
he came to the road.

4 comments on “A Painter and a Poet speak of Serpents”