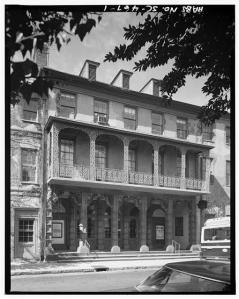 There is a magical corner in the city of Charleston. It is where Queen Street meets Church Street.

The corner may be the most drawn, painted, and photographed in all of the city, a favorite of Charleston Renaissance artists Alfred Hutty and Alice Ravenel Huger Smith, and recently, for an artist who camped out all summer, in his van, painting an enormous canvas of the spot. What is the energy that enlivens this place? Certainly, it is the presence of the Dock Street Theatre, which is said to have been the first building built, in 1736, specifically for theatrical performances in America. Later, in the early 1800’s that building was renovated by Alexander Calder (who, some say, was related to Alexander Calder, the artist) into The Planters Hotel. The building complex is the last surviving antebellum hotel building in Charleston. Directly across the street is the French Huguenot Church, built on this site in 1687, which is the only remaining Huguenot church in America. Then there is St. Philips Episcopal Church, whose history harkens from the earliest days of Charles Town, the colony. Her pointing spire and imposing tower, built in the Wren-Gibbes tradition, anchors and reaches to the heavens in this neighborhood, now called the French Quarter. The engraving above is by Alfred Hutty.

This is a place that confirmed for me the power of pilgrimage. Some years ago, after years of searching, documenting, and graphing the ancestors, one of my goals was to find the house where Aunt Elizabeth Blanche Smith Torrans lived in the middle of the 18th century. From the fabulously interesting, and impeccably researched book about her younger brother, Joshua Hett Smith, (who was accused, then exonerated, of treason with Benedict Arnold!) called Accomplice in Treason (Richard J. Koke, published by the New York Historical Society, 1973) I learned that Elizabeth lived with her husband John Torrans at 36 Queen Street. Her younger sister Margaret Smith had married Alexander Rose and lived nearby. Their brother, Samuel, would move later to Beaufort, and three more siblings would eventually follow. Alexander Rose and John Torrans were merchants in the middle of the 18th century when Charleston was a bustling trade center, the hub of the Atlantic trade for the southern colonies, the wealthiest and largest city south of Philadelphia. (By 1770 it was the fourth largest port in the colonies, after only Boston, New York, and Philadelphia, with a population of 11,000, of which slightly more than half were slaves) The Smiths of New York were children of Judge William Smith and Mary Dubois Het Smith

. Elizabeth’s mother, whose beautiful portrait this is, was French Huguenot. Two of John and Elizabeth’s daughters, Rosella Torrans and Eliza Cochran, would be professional artists, landscape painters, according to David Ramsay, the great physician and South Carolina historian.

So imagine my thrill, on this pilgrimage to the places my ancestors walked, to saunter, address in hand, to this very magical corner and stand, awestruck, realizing that this very spot was where the house at 36 Queen Street would have been! A quote from a favorite book called The Art of Pilgrimage by Phil Cousineau, in a chapter where he speaks of this very sort of pilgrimage says that people wonder what you are pursuing when you search for ancestors. He suggests telling the story about the thread. Pilgrimage is to go somewhere looking for the sacred. It is also about making meaning, and being able to see what is often right before our eyes! It’s about finding the ‘under glimmer’ about which, the poet, Basho, reminds us. It is the age old story, the same as the archetypal Greek myth of Ariadne, Theseus and the labyrinth. It is about going out to come back, about coming full circle, about finding the golden thread that leads us to our center.